I contributed to this project as part of a workshop organized during my Master school year. It was a team project mixing several trades: fashion, space design, product design, … I was in charge of the communication / graphics part.

Nastasia Zugaz was responsible for the fashion part: research of style, moodboards, muse … She imagined the universe and the atmosphere of this perfume.
William Simonnet was in charge of the product design part. He imagined the bottle and its packaging, and modeled them in 3D.
Julien Gekiere, Hélène Borie and Julie Richard did the POS advertising for the product. They thus imagined a stand taking up the universe of the perfume and modeled it in 3D.
As for me, I realized the logo of the House of the perfume (Sacré Coeur), the logo of the perfume in itself (Appearance), the posters, the press insert for a double page in a magazine, and last but not least, the website.

The logo of the House has been thought of as an emblem, a coat of arms. It is a guarantee of quality, trust and credibility, as well as prestige.

Through the creation of the perfume logo, we wanted to communicate our universe: fantasy, sweetness, vulnerability, tenderness …
That’s why we chose a typographic, manuscript, and unpretentious logotype.

We tried our best to make the graphic charter coherent and consistent with the values we wanted to share. 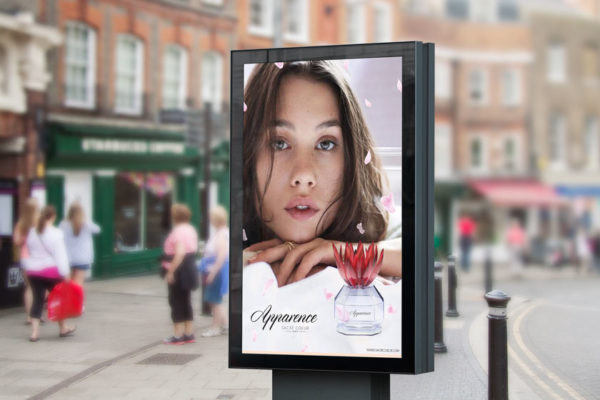 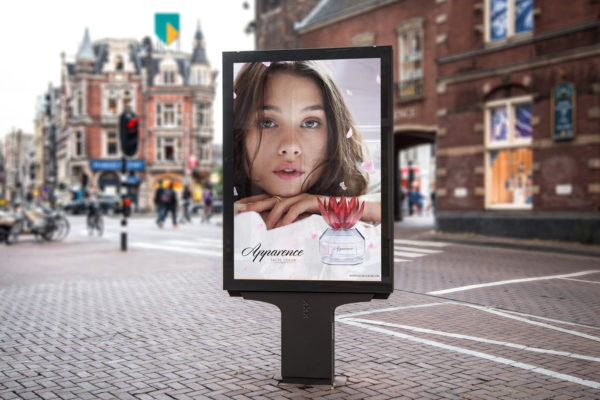 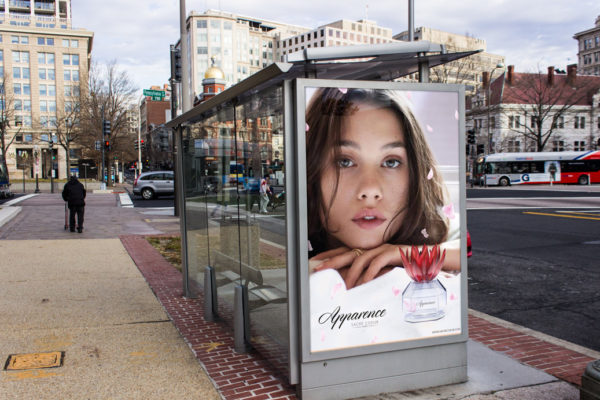 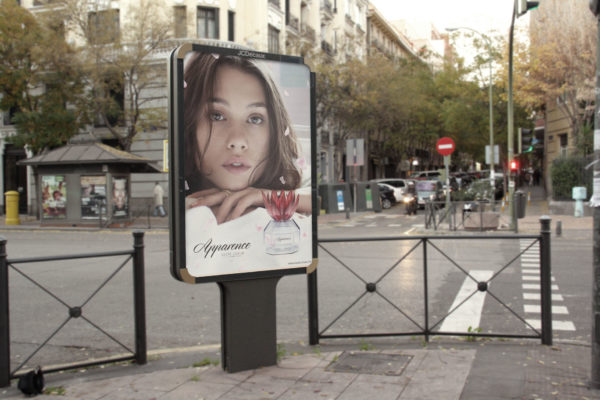 The bottle was modeled in 3D with the help of William, our product designer. It is built in transparent crystal, with a cap representing a peony, the scent of our perfume.

The packaging consists of a square base, in which fits the bottle perfectly. This base is surmounted by a transparent cube with slight reflections. It’s a pretty minimalist set that enhance the bottle inside. 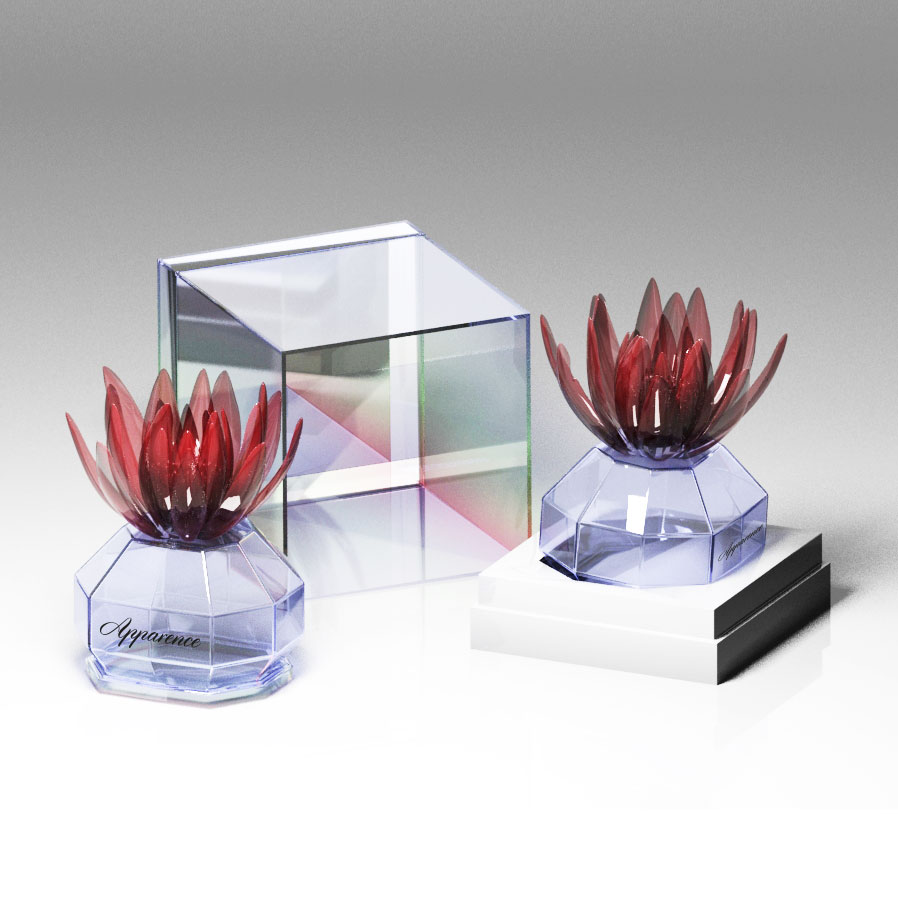 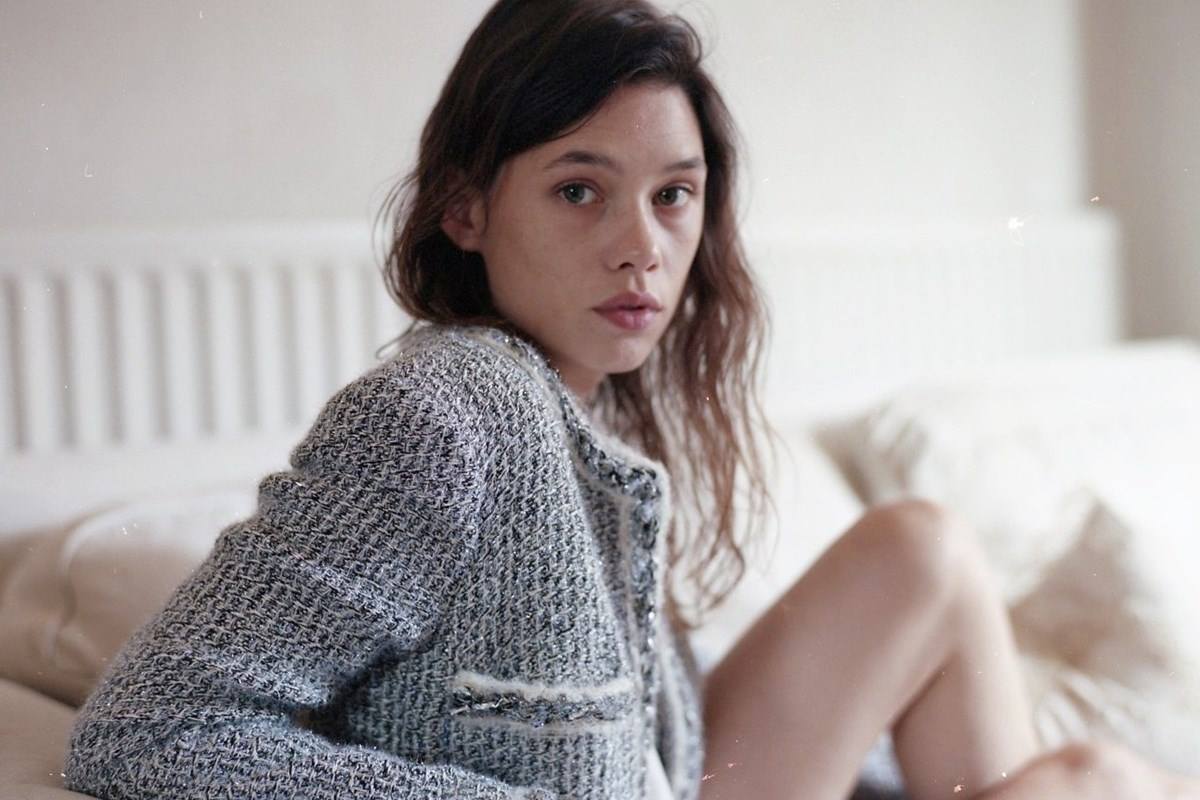 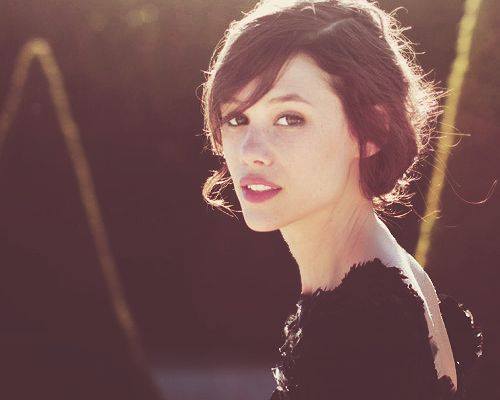 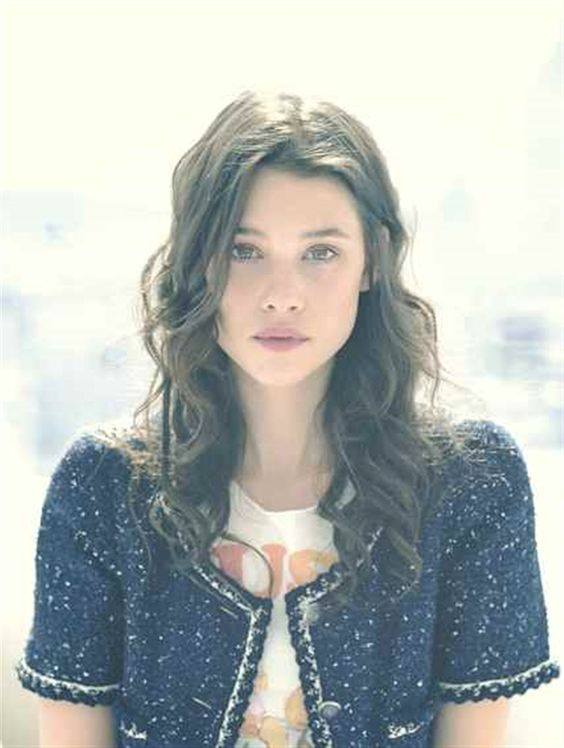 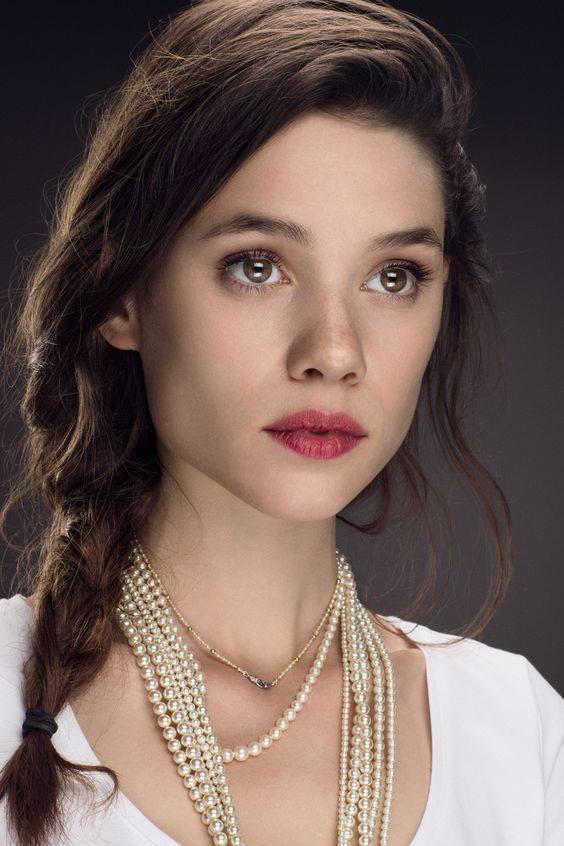 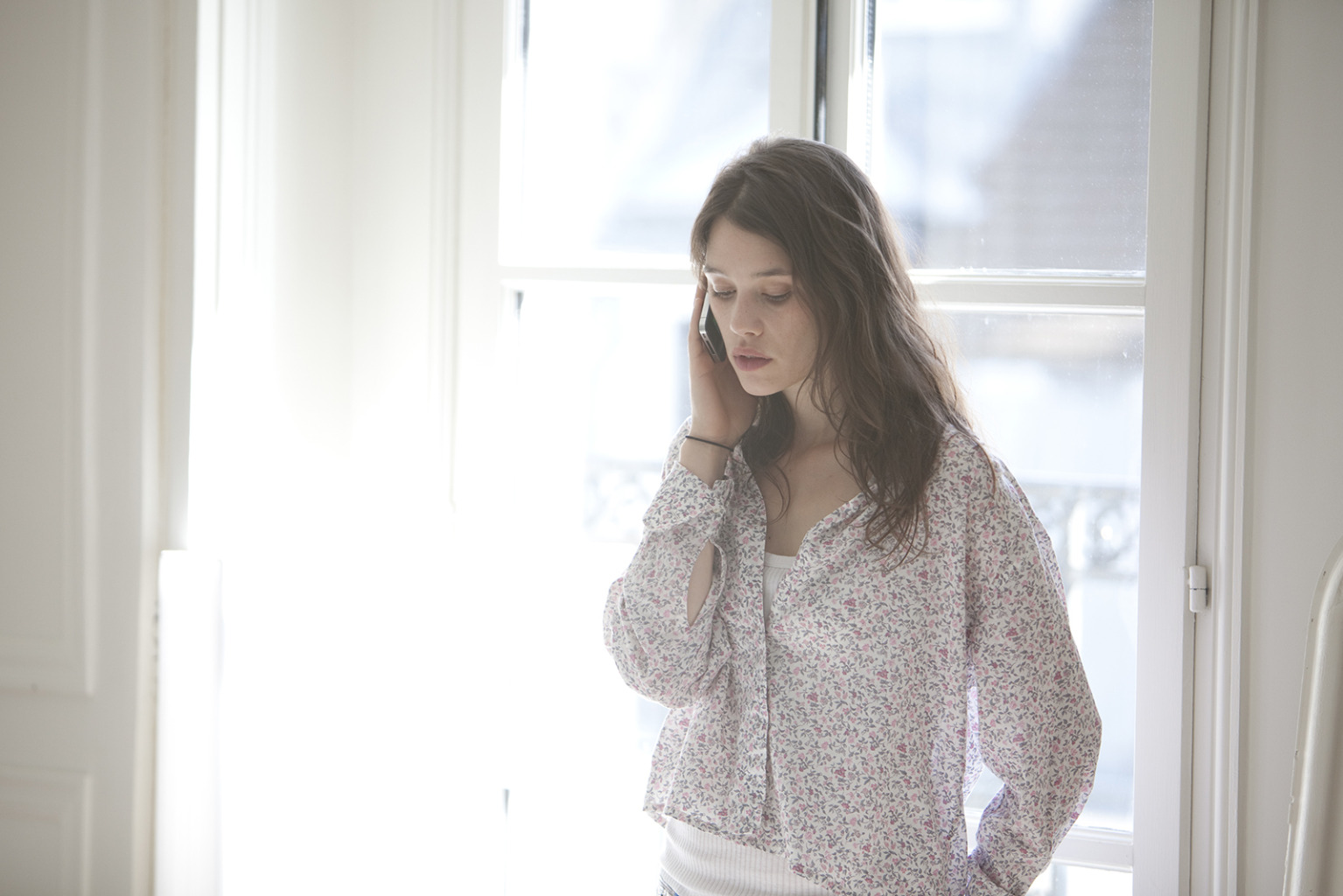 We declined the poster in horizontal format, to adapt it to the advertising format. 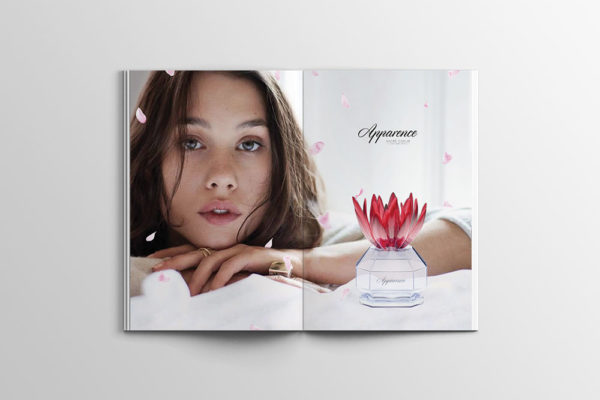 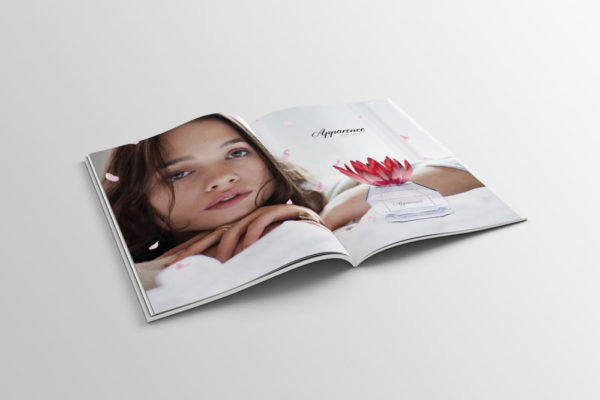 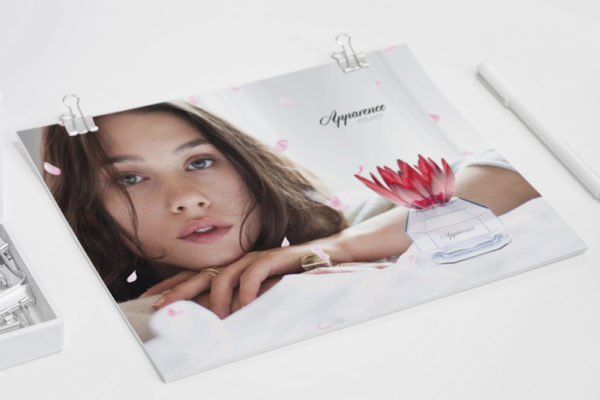 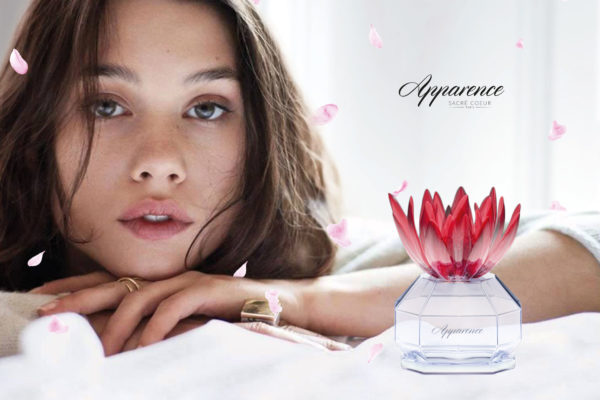 I designed the landing page of the Sacré Coeur Apparence perfume. It was made to make a statement, showing our identity, our universe and presenting the product.